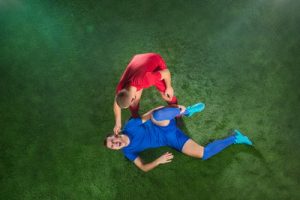 Since the beginning of the beautiful game, the length of play has remained consistent. There have naturally been some extensions to the standard 90 minutes of play, such as ‘added time’, ‘Extra time” and the dreaded penalty shootout. However, all things being well, matches have remained 90 minutes long, divided into two 45-minute periods (youth football is the only exception).

And yet, increasingly, in the modern game, questions are being asked about the length of games and the amount of time the ball is actually in play for. In an era of time-wasting, drink breaks and mass substitutions, does it still make sense to keep the clock ticking over while the ball isn’t in play?

To answer this, we first need to assess how long the ball is indeed ‘in play’ in most games. In doing so, we’ll get a better read on whether the rules should be modernised in some way or if concerns over the 90-minute time length are overblown.

In so many other team sports, from rugby and American football to basketball, the clock is always stopped when the game is halted for whatever reason. Here, we will attempt to uncover whether football may have to follow suit eventually. 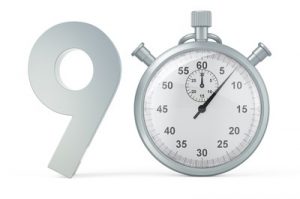 The duration of a football match was first codified in Britain in 1866. Prior to a game between London and Sheffield, both sides agreed upon 90 minutes of play, with that duration becoming the standard in the elapsing years since.

Men’s and women’s matches last an hour and a half, with a 15-minute half-time interval. The FA’s official rules read:

“The duration of each match shall be 90 minutes, except in special cases, provided for in these Competition Rules, where an extra 30 minutes shall be played. The Referee shall allow for time lost in accordance with the Laws of the Game or through accident or other cause, and his decision on this matter is not subject to appeal.”

“The half-time interval shall be 15 minutes for all ties in all competitions. Both teams shall enter the field of play together, five minutes before the kick-off time, along with the Match Officials.”

When A Football Match Last Longer Than 90 Minutes 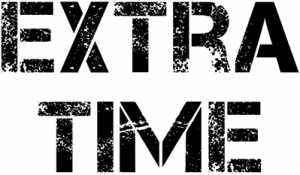 A football match can last longer than 90 minutes when tied at the end of certain Cup games. In knockout rounds, a clash will generally go to extra time – two extra 15-minute halves – and penalties if neither team has won in that time.

The average football match will generally last longer than the given 90 minutes anyhow, mainly due to stoppages and subsequent added time. Goals and substitutions usually knock on about 30 seconds each to the referee’s watch and injuries can sometimes add on minutes. Sometimes, over 10 minutes can be added should the delay be substantial enough.

How Time-wasting Has Created A Big Problem 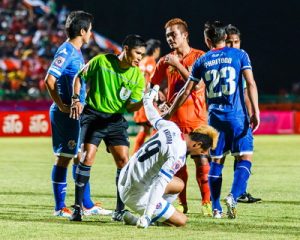 There are many things that the modern football fan has slowly grown accused to. Phenomena like VAR, eye-watering transfer fees and ever-stricter refereeing have all revolutionised the game in the 21st century.

You can also add time-wasting to this list, which we’re all used to seeing when a team is in an advantageous position heading into the closing stages of a game. Taking the ball into the corner, delaying the taking of throws or free kicks, and leaving the pitch slowly after being subbed off are all widely accepted methods of running the clock down on a football match.

Chart showing match stoppage causes for the first 32 matches of the 2018 World Cup (Data by Fivethirtyeight): 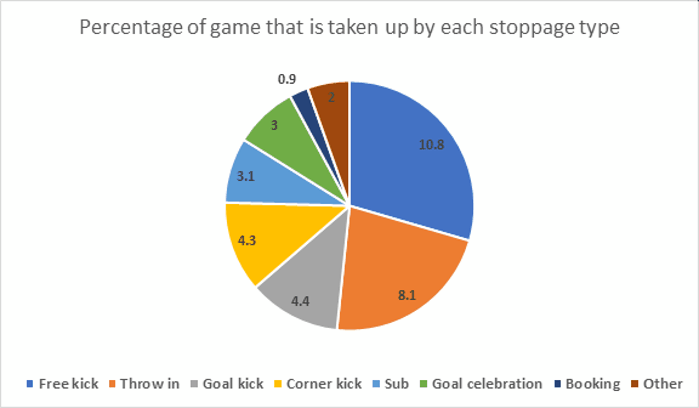 While such techniques have always existed, it’s undoubtedly been developed into an art form in recent years. As with all sports, it’s just one loophole that canny players and coaches can exploit as the clock continues to tick even while the game is stopped. If stoppages are excessive, injury time can be added, but unless there is a serious incident on the pitch, you’d be hard-pressed to find many examples of games with over six minutes on the clock.

So then, how do you solve such a problem, especially when time-wasting is viewed as inevitable and is roundly accepted by players and fans alike? To try and combat such issues, several different proposals have been put forward in recent years.

Minutes with the ball in play for the first 32 matches of the 2018 World Cup: (via Fivethirtyeight) 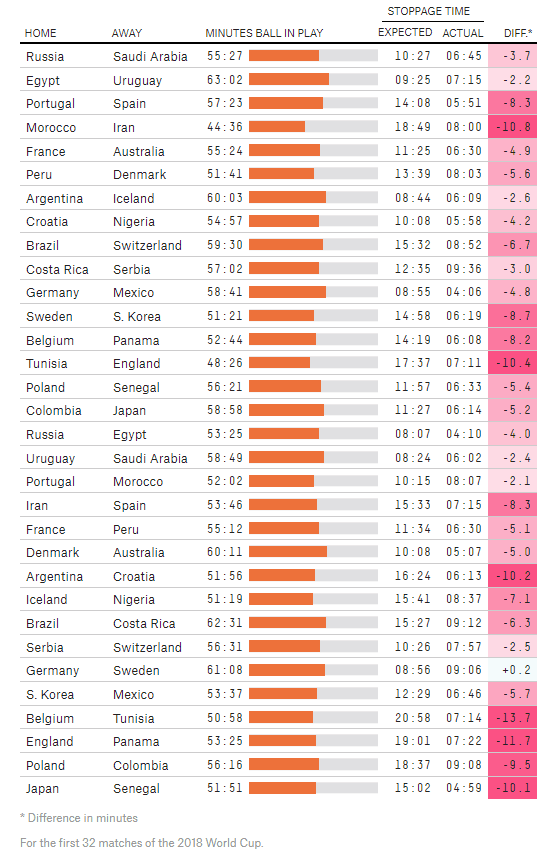 How Long Is The Ball Actually In Play For? 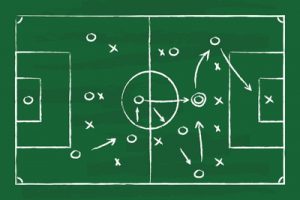 The main issue revolves around the high percentage of the match that is taken up by various forms of gamesmanship and general play stoppages. Data compiled by Opta and the BBC gives us a good idea of how many minutes, on average, the ball is actually in play – and how long the game is being contested.

Using the Premier League as a reference point, in the 2021/22 season, the average ‘ball in play’ time across the entire division was just 55 minutes and three seconds. This figure is the lowest since 2010/11 and is indicative of the general increase in delays that we previously alluded to.

The Average Time The Ball Is In Play Per PL Season

Most worryingly of all, the ‘ball-in-play’ average hasn’t been higher than 57 seconds over the past 15 Premier League seasons (2013/14 was the highest season average in that time at 56 minutes 43 seconds). This means that just over a third of the game is wasted, as half an hour of stoppage time will never be added at the end of a game, regardless of the number of stoppages.

There are also some additional factors to bear in mind regarding this trend. As the data demonstrates, teams who play possession-based football tend to keep the ball in play for a longer average time than those who play a more direct, route one style. For instance, on average last season, Pep Guardiola’s Manchester City kept the ball in play for 60 minutes per game, with Spurs and Liverpool closely behind at 57 minutes.

By contrast, at the bottom of that list are the likes of Aston Villa, Southampton and Burnley, each on 52 minutes – whom all rely on a form of counter-attacking football. When looking at historical data, the reality becomes even more stark. The lowest amount of time the ball has been in play for in the Premier League since 2006/07 was for a February 2010 clash between Stoke City and Blackburn Rovers. At the Britannia Stadium, home to Tony Pulis’ famously direct Stoke City, the ball was in play for just 39 minutes and 1 second – less than a half of football.

The Potters would win that tie 3-0, with much of their game revolving around set-pieces and fouls that interrupted the game’s flow. For a long period, it was highly effective, especially against possession-based sides like Arsenal, who often struggled to get into a rhythm against Pulis’ men.

Further to this, when we compare ‘ball in play’ time across individual competitions, we see how some suffer more than others. As you might expect, given the quality of the players and teams in the competition, the ball is alive in Champions League games for a longer time on average when compared to the likes of the Premier League, the Bundesliga and Ligue 1.

In 2021/22, UCL ties had an average of 56 minutes and 54 seconds per game, while La Liga was the lowest out of the major European leagues at just 53 minutes and 21 seconds. 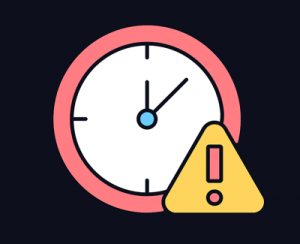 The main solution to this issue, which has been championed by several coaches, referees and governing bodies, is to introduce a basketball-style timer where the clock is stopped when the ball goes out of play. In this instance, the game could then be reduced to 60 minutes, bringing it more in line with basketball, which is just 48 minutes long.

The idea of shortening football matches is nothing new. One of the most vocal proponents is Real Madrid president Florentino Perez, who asserts that shorter games might appeal to younger generations. According to Perez, it could help “save football”. However, what’s being presented by other individuals is something different, as a 60-minute match would still end up being around 90 minutes.

Under this system, the timer would be stopped whenever the ball is out of play, a substitution is made, or intentional time-wasting takes place. Currently being looked at by legendary referee Pierluigi Collina, FIFA and the IFAB, it already has the backing of some leading figures in English football. As former Champions League Final ref Mark Clattenburg explains (via the Daily Mail), the 60-minute clock would

“guarantee paying punters that they at least get to see an hour of football on the pitch.” He adds that “It’s a conversation that our sport should be having.”

Does Football Need A Rule Change? 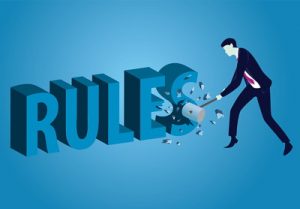 There are certainly robust arguments to be made for why the rules should be altered. Introducing 60-minute games where the clock can be stopped would mean that time-wasting, in the form of leaving the pitch slowly, or delaying the taking of a goal kick, would become pretty futile acts.

However, even if such changes were made, likely, some form of time-wasting would still remain, as one of its primary functions is to halt momentum and slow down the pace of the game. In basketball, a coach has the opportunity to do precisely that in the form of the ‘timeout’. While time-wasting can’t run the clock down, a coach will use a ‘timeout’ to stop play if an opponent is on top – in an attempt to rally their players and try to turn the tide. Henceforth, even if the clock could be stopped in football, you’d still have to deal with some interruptions of that nature.

Another factor to consider before implementing such a rule change is that it’s yet another law that separates football from the grassroots. While referees would be able to stop and start the clock using a stopwatch further down the footballing pyramid, it adds yet another layer of complexity to what is – ostensibly – a straightforward sport. 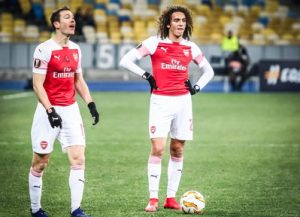 As we have shown, football certainly has a timekeeping problem that needs to be confronted somehow. The numbers don’t lie, as if you have a situation where most fans only see the football in play for less than 60 minutes of the 90, questions are naturally going to be asked.

Potential solutions to this very issue do exist, but most would generally involve messing with a fundamental aspect of the game that has been in the Association Football rulebook since the very beginning. In an age of five subs per game, tactical fouling, and increasingly intelligent time-wasting, perhaps now is the time to trial new ways of timekeeping matches.

Indeed, for football to remain future-proof and appeal to a younger audience, preventing annoying delays here and there may be essential. While many of the solutions above are still very much in the embryonic stage, VAR’s introduction shows that the game’s rules are malleable if the collective will is there to change them. 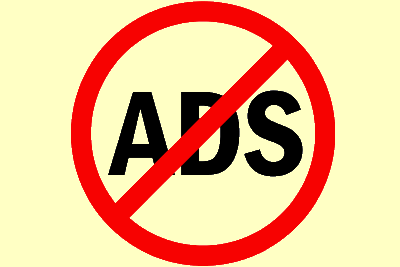 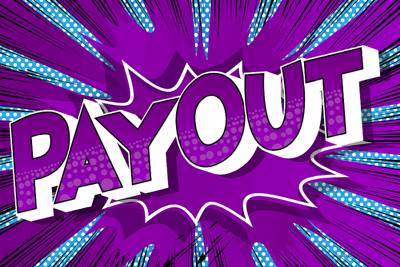 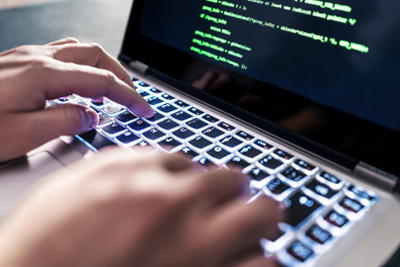