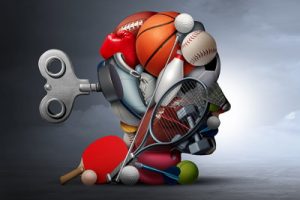 In many ways, it shouldn’t be a surprise to anyone that someone that is good at one sport is often talented at another. After all, many sports require similar attributes, such as dedication and hand-eye coordination. Yet it is still slightly surprising to learn that someone that has made their name playing golf, say, is also brilliant at tennis. Just as we shouldn’t be shocked to see members of The Beatles be proficient at different instruments when watching the excellent Peter Jackson documentary Get Back, so too should talented sports people not be a huge surprise.

Regardless of whether we shouldn’t expect sports professionals to be able to turn their hand to different disciplines, it’s certainly something that we have grown accustomed to. It is also important to note that we’re not talking about the likes of Jessica Ennis-Hill, who specialised in multi-eventing disciplines. Instead, we’re looking for those sports stars that were well-known for one sport but were exceptionally talented at many others. People who didn’t just excel in one specific sport but were able to move into a different world and be almost as successful, if not even more so, in the other event.

Darts is a sport of accuracy and precision. It is not one that is about strength, but rather comes down to a competitor’s ability to get their hand-eye coordination so fine-tuned that they can accurately throw a small spear into a well-defined space in order to rack up as many points as possible as quickly as they can. Gerwyn Price competes in the Professional Darts Corporation and is an exceptional darts player, racking up wins in the the likes of the World Championship, the World Grand Prix and the World Series Final.

You would therefore struggle to imagine him as a rugby player, yet his first foray into the world of professional sports came playing rugby as a hooker for the Welsh Premier Division sides Neath and Cross Keys. He also played rugby league for the South Wales Scorpions. Not only that but Price also played as injury cover for the first-choice players at the Pro12 side Glasgow Warriors, so it’s entirely fair to say that he was more than just a battering ram. As a player for Cross Keys, Price won the Welsh Rugby Union Challenge Cup during the 2011-2012 season.

At the same time as playing rugby, Price was playing darts for his local side, Markham Welfare. In 2014, he decided that it was time to give up rugby in order to concentrate on his darts career, having joined the Professional Darts Corporation through the body’s Qualifying School. In the years that followed, Price made a name for himself in his new sport, earning himself £12,750 in his first year. He won his first major competition in 2018, having made the quarter-finals of the World Matchplay event three years earlier.

His decision to leave rugby behind was justified when he became the first Welsh player to win the PDC World Darts Championship in 2021, becoming the world number one in the sport that same year.

A quick look at a list of athletes that have won Olympic medals in different sports will present you with a list of people who did well in disciplines that a closely linked. In 2018, for example, Ester Ledecká won gold in alpine skiing and snowboarding; two different sports that are at least in the same ballpark. That, in many ways, is what makes the achievement of Eddy Alvarez even more impressive. The Cuban-American baseball infielder is known for his success in Major League Baseball, but before he turned to baseball he was a proficient short track speed skater.

When we say proficient, we don’t just mean that he was good at it when he tried it with some friends one winter. Instead, he is a metal winner thanks to his exploits in the discipline during the 2014 Winter Olympics. Short track speed skating involves multiple skaters taking on an oval ice track in order to see which of them can get around it the quickest. It is about as far removed from baseball as it is possible to get, yet Alvarez is so good at both sports that he’s got a silver medal in each, winning his baseball one in 2020.

Alvarez is perhaps the best example of someone who has been able to succeed in their chosen disciplines thanks to hard work, given that his skating career could have been over in 2012 when he underwent surgery on badly torn patella tendons that left him immobile for a month. His dedication to return to sports allowed him to complete his dream of winning an Olympic medal, after which he was signed to the Chicago White Sox and began a new career in baseball. He moved on to the Miami Marlins, where his success earned him his place in the US Olympic team in May of 2021.

Fans of Soccer AM, presuming there still are some, will recognise the name of Jimmy Bullard as being the perennial clown on the football-themed show. What many people might not realise is that, after having to retire from football, Bullard turned to golf in the hope that a new sport would fill the void that he felt was left in his life. Bullard’s football career began at Corinthian before moving on to Dartford and then eventually getting his start as a player for Gravesend & Northfleet. It was a career that took in stints for West Ham, Wigan Athletic and Hull.

Bullard eventually had to call time on his professional footballing career in 2012, after making just two appearance for the Milton Keynes Dons. He did try his hand at management for a time, taking over the hot-seat at the Isthmian League Premier Division side in September 2016, but he left at the end of the season. It is fair to say that Bullard is better-known for being a television personality than anything else, having appeared in the 14th season of I’m A Celebrity…Get Me Out Of Here in 2014.

That came a year after he had decided to turn professional in golf, hoping that the sport’s slightly more friendly approach to physicality would put less demand on his perpetually damaged knee. He followed in the footsteps of Julian Dicks, who was another footballer that decided to try his hand at golf, though did so more successfully by earning a place on the EuroPro Tour. Though he never quite made it as a golfer, the modern-day Bullard hosts a podcast all about another of his major passions: fishing.

The name of Herschel Walker isn’t one that is all that well-known to most British people, but there will be a fair few that will recognise it; the only question is, where from? Born in 1962, he played college football for the University Of Georgia and won the All-American honours three times. Indeed, he won the Helsman Trophy in 1982 and is considered by many to be one of the best ever college football players, so it was no surprise when he turned professional. He joined the New Jersey Generals before moving on to the Dallas Cowboys.

Over the years, his name became synonymous with the idea of a trade, having also played in the National Football League for the Minnesota Vikings, the Philadelphia Eagles and the New York Giants. Whilst still being an active player in the NFL, Walker joined the United States’ Olympic team as a bobsleigher. Though he was originally selected to be part of the four-man team, he eventually took part in the 1992 Winter Olympics as the brakemen for the two-person team, placing seventh.

Not content with mastering two disciplines, Walker turned to the world of Mixed Martial Arts in 2007. A heavyweight for the American Kickboxing Academy, he signed for the MMA promotion company Strikeforce in 2009 at the age of 47. He had two professional fights, winning both of them by knockout, before donating his winnings to charity. In 2016, Walker supported Donald Trump’s bid for the Presidency and was rewarded with a place on the President’s Council on Sports, Fitness and Nutrition, showing that it’s not just taking part in sports that can give some athletes their kicks.

Never let it be said that football fans don’t have dark senses of humour. When it was revealed that Andy Goram had a mild form of schizophrenia, the crowds on the terraces chanted ‘there’s only two Andy Gorams’. Born in Bury, Goram began his footballing career playing for Olham Athletic before moving to Hibernian. He really made a name for himself as Rangers’ goalkeeper during the 1990s, earning the nickname ‘The Goalie’ to signify his ability. Indeed, he was named the club’s greatest ever goalkeeper in a 2001 poll of the club’s supporters.

At the same time that Goram was keeping net for different football clubs, he also played league cricket as a wicket-keeper and a batsman. This was mainly at clubs in and around Oldham initially, but when he moved up to ply his footballing trade in Scotland he appeared for the likes of Penicuik Cricket Club, Kelso Cricket Club, West Lothian County and Uddingston Cricket Club. On top of that, he also represented Scotland four times at the international level, meaning that he was the only sports person to play a first-class cricket match and the same level football match for Scotland.

In many way, it is not all that surprising that a footballer might turn to cricket when you bear in mind that football started life as a sport to give cricketers something to do during the winter months. Even so, it is still interesting to see that the right-armed bowler and left-handed batsman was able to turn his attention to both disciplines with such a level of skill. He didn’t even ease up as he got older, appealing for Scotland’s Over-50s team against a Lancashire Over-50s side in 2016, showing that love of sport never really dies.

Sometimes the choice to take on another sport is one that is taken on willingly by the participant, whilst other times it is forced upon them. In the case of Alessandro Zanardi, we’re definitely looking at the latter category. Though it would be untrue to refer to him as a particularly successful Formula One driver, that was the world in which Zanardi existed during the early part of his career. Born in the Italian city of Bologna, he began racing carts at the age of 13 after building one for himself from dustbins and pipes found in his father’s workshop.

Eddie Jordan brought Zanardi in as a replacement for Roberto Moreno in the Formula One season in 1991, contracting for Lotus in 1993. He had tested out for Benetton at the time and later admitted that if he’d gone to them instead he likely would have become a full-time driver and part of a race-winning team alongside Michael Schumacher. Instead, he went to Lotus, where things didn’t work out. He took to CART racing in the United States instead, becoming very successful, with championship wins in 1997 and 1998, but suffered a major crash in 2001.

The crash led to Zanardi having to get his legs amputated, limiting his ability to race. Though he did return to the CART circuit and also competed in the European Touring Car Championship, he also took up the Paralympic cycling discipline of hand cycling. His aim was to compete for the Italian Paralympic team, which he did in 2012, winning a gold medal in the men’s road time trial H4 during the London Paralympics. Never one to stop pushing himself, he was involved in a serious crash during the 2020 Obiettivo tricolore in Italy, resulting in him being put into a medically induced coma.