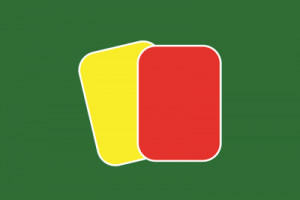 Both yellow and red cards have played a pivotal role in deciding some of the most significant games in modern football history. Ever since the introduction of bookings at the 1970 World Cup, they have transformed the game for better and for always. Fewer cynical fouls result in fewer serious injuries, allowing possession football to flourish.

And yet, for all that we have seen a general reduction in serious foul play around the world, the game certainly isn’t completely rid of it. So just how often do referees have to reach into their back pocket to dish out a yellow – or the dreaded red – card? Let’s find out.

History Of Bookings In Football 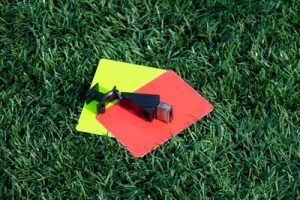 As was mentioned in the introduction, cards, as we know them today, were first introduced at the 1970 World Cup in Mexico. Before this tournament, the referee did have the power to dismiss players and ‘caution’ them for infringements. However, when it came to international tournaments, the man in the middle would often struggle to communicate their instructions to a player due to the language barrier.

During the 1962 World Cup, an English ref called Ken Aston officiated the tournament’s opening game between Switzerland and the host nation, Chile. He did such a sterling job that FIFA asked him to also officiate a game between Chile and Italy, which was tipped by many to be a fiery affair. Those predictions turned out to be true, with armed police needing to aid Aston in his refereeing of the game on three separate occasions, leading to him saying years later: “I wasn’t reffing a football match, I was acting as an umpire in military manoeuvres”.

From then on, Aston spent much of his time trying to work out how cautions and sendings off could be more clearly communicated on the football pitch. More mix-ups at the 1966 World Cup fast-tracked the need for a solution of some kind. It would come an unlucky moment of inspiration. While driving down a Kensington street in London, Aston noticed how effective traffic lights were at giving clear instructions to drivers. From this, he would formulate the idea of cards in football, taking inspiration from those lights. As he describes: “yellow, take it easy…red, stop, you’re off.”

After approaching FIFA with his revolutionary new idea, football’s global governing body decided to trial it at the 1970 World Cup. Regarded as a successful codification of rules that stretched back almost 100 years, cards would then slowly be introduced across all European leagues over the course of the next decade. In 1976, red and yellow cards were finally introduced in English domestic football. No longer would a player be able to use language barriers as an excuse for not leaving the pitch.

Red Cards awarded per each World Cup since 1970:

How Often Are Yellow Cards Awarded? 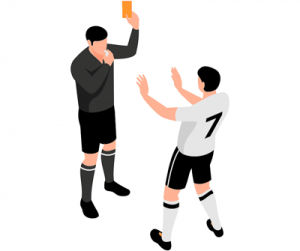 Any elite-level football game rarely passes by without a card of some kind being dished out. While friendlies tend to remain civil for the duration, in the highly competitive world of professional football, where trophies and livelihoods are on the line, players will push the limits of the law to try and gain an advantage. In the case of yellow cards, which essentially act as warnings to players, they are crucial in helping the referee to keep the match under control.

Using the Premier League as a case study, we can track how many yellow cards are dished out per season, to try and spot if any trends emerge. While football is generally considered to be much less violent than it used to be, it’s also true that referees have been more liberal with their use of the yellow card for fouls that previously might have been permissible.

Looking at the past five full Premier League seasons, we can see that there was a total of 6,159 yellow cards handed out – with a high of 1392 yellows in the 2016-17 season and a low of 1097 in the 2020-21 season. Interestingly, the decline in yellow cards shown last season may have something to do with the lack of crowds that we saw for long periods of the season.

It could be argued that, without the febrile atmospheres generated by passionate home crowds, players are less likely to act out of emotion rather than logic. We see how passion can get the better of players in derby matches, which can often descend into chaotic affairs due to the high intensity of the game – and the desperation of both sets of players to win.

The stats back up this assumption too. Since the beginning of the Premier League, the two fixtures with the most red cards are both fierce, historic rivalries. Everton v Liverpool has produced 21 reds, while Manchester United v Liverpool has seen 16 red cards since 1992. Remarkably, three of the Merseyside Derby red cards actually came in one game – that being the September 1999 clash at Anfield where Franny Jeffers, Sander Westerveld, and the legendary Steven Gerrard were all dismissed.

In terms of the average number of cards shown per game, the 20/21 season’s 2.89 is by far the lowest over the past five years. By contrast, 2016/17 had a high of 3.66 yellow cards per game. Could this be a sign of fairer conduct from the players, or instead, a more lenient approach being applied by the officials today?

Red Cards In The Premier League

Contrastingly, when it comes to red cards, more straight reds were awarded last season than in any of the prior four campaigns – with 33 in total. The lowest amount during this time was 2017/18, where only 21 were awarded. Once again, it’s hard to pin down exactly why this was the case, especially when it directly contrasts with the yellow card trend. 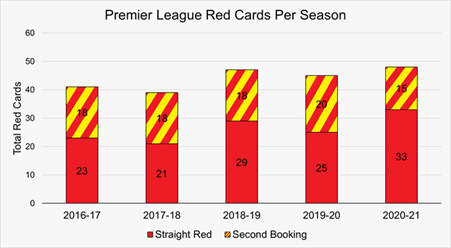 One possible theory is new directives that have been given to referees in terms of what constitutes violent conduct. For instance, tackles that resulted in a player winning the ball would have previously been regarded as legal in almost all circumstances. Now though, a player can be dismissed for endangering the opponent in the process of winning the ball back – for instance, if the challenge is deemed to be high or “out of control”.

How Do Red Cards Impact Games?

The consensus would generally be that teams will suffer more after having a player sent off. A 2019 study by innerdrive all but confirms this – but with a small exception. It’s author looked at all fixtures from the 18/19 Premier League season, assessing where a red card was dished out, and when it occurred during a game.

While naturally costly, a red card doesn’t necessarily lead to one team being on the wrong end of a thrashing. With only 10 men on the pitch, a team will instead look to sit deep, absorb pressure, and if at all possible, try and earn a point. In this sense, a red card can lead to fewer goals being scored in a game, especially if the side that picks up the red decides to stop playing for the win.

A good example of this in action would be Arsenal’s 2-1 win over Leeds United in May 2022. The Gunners looked rampant at the Emirates, scoring an early goal thanks to Eddie Nketiah. However, the previously exposed Leeds defence suddenly tightened up once Luke Ayling was sent off after half-hour, as the Lilywhites stopped trying to attack in numbers, and merely attempted to keep the scoreline down.

Which Clubs Are The Worst Offenders? 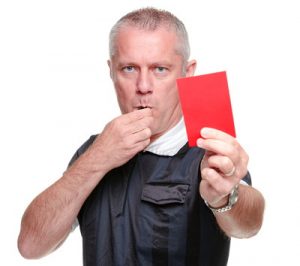 Throughout the current Premier League season (21/22) which is into its final weekend at the time of writing, we have seen some interesting trends develop regarding cards. Only two players in the entire league have picked up two red cards this season, with one being Wolves forward Raul Jimenez, and the other being Aston Villa’s Ezri Konsa.

The man with the most yellows to his name is Leeds United’s Junior Firpo, who has 11 to his name from just 23 Premier League starts this term. Next on the list, each with 10 yellow cards, are Jan Bednarek, Yves Bissouma, Josh Brownhill, Conor Gallagher and Tyron Mings. 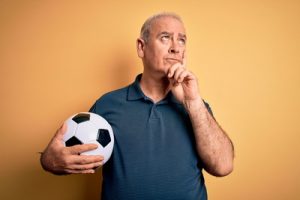 When looking at this season’s card statistics, one thing that becomes apparent almost immediately is just how few cards Liverpool, Manchester City and Chelsea players picked up. To this end, Manchester City (who currently top the PL) are bottom of the yellow card chart this Premier League season, with just 47. Liverpool, by contrast, are third bottom with 49, while both clubs, as well as third-placed Chelsea each have only one red card to their names.

What this is goes to show is that the league’s most successful sides can maintain discipline and avoid picking up silly cards in matches. One clear reason for this is down to the fact that all three dominate possession against weaker Premier League sides, and thus, have to resort to tackling a lot less. Whereas, when one looks to the top of the Premier League offender charts, we clearly see two relegation-threatened clubs topping both for yellow and red cards.

Six red cards have been awarded to Everton players this season, while Leeds United players have picked up a staggering 100 yellow cards since last August – 20 more than second-placed Newcastle. It’s a worrying trend for both, but also perhaps an indication of what desperation does to players in high-pressure situations.

As clubs with huge and very passionate followings, the desire to show commitment in front of your home faithful must be overwhelming for many Everton and Leeds players. Add in the obvious desperation to avoid a humiliating relegation, and you have the perfect recipe for over-zealous challenges, many of which will be punished by the referee. Indeed, looking at recent Premier League seasons alone, there does appear to be a correlation of sorts between performance and the number of cards a team picks up during a season.

As we’ve shown, the introduction of yellow and red cards in the 1970s has profoundly changed football, from the way it is played to the way it is officiated. In terms of the average number of bookings, what we have also seen is a general downward trend of late, while the same can be said of red cards over a longer period of time.

For example, red cards awarded dropped from an all-time high of 27 at the 2006 World Cup, to just four in Russia in 2018. The reasons for this are multi-faceted, but a similar trend has been observed in terms of bookings too, as there were fewer yellow cards in last season’s Premier League than at any time in the past five years.

It’s crucial to remember that VAR has had a massive impact on the number of cards we are seeing. Players today know that every infraction will be picked up by the cameras, meaning that they now have to think twice about trying to bend the rules of the game. Will this shift lead to a better spectacle overall for fans? Time will ultimately tell, but if it can have the kind of impact as the card system football – from a viewer’s perspective alone – surely stands to benefit overall.