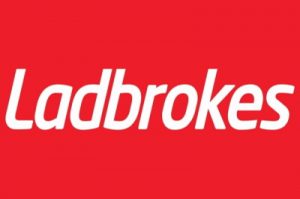 Taking a look at high street bookmakers, you get the feeling that some of them have been there forever. Names like William Hill and Coral seem to have been standing alongside other shops in Britain for all of eternity, but in actual fact that’s not the case. The bookies that still have shops open in this day and age were around well before they were legally allowed to operate anywhere but on racecourses, but which is the oldest?

That honour goes to Ladbrokes, who started taking bets at the start of the 20th century, having originally operated as a commission agent for the horses that were trained at Warwickshire’s Ladbroke Hall. The betting industry is such that virtually all of the names we know nowadays, even some that have moved exclusively online, have some fascinating stories to tell about how they came into existence in the first place. 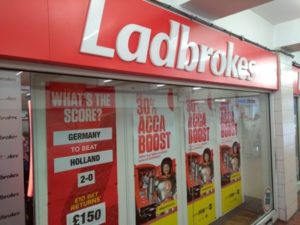 Founded as commission agents to the horses that had been trained at Ladbroke Hall in Warwickshire in 1886, the name ‘Ladbrokes’ was only adopted after the company moved to London in 1902 and Arthur Bendir joined the partnership of Messrs. Schwind and Pennington. That was also the year that the Ladbrokes bookmaking service was created, with Bendir encouraging his partners to bet against horses as well as backing them.

Back then, of course, there was no such thing as high street bookmakers. Instead, bookies had to operate on horse racecourses only. They had offices near the Strand, moving to Hanover Square in 1906 and then again to Mayfair in 1913. Their position in Mayfair allowed them to appeal to a certain type of clientele, operating exclusively on behalf of the British aristocracy and upper class to begin with.

One thing that helped Ladbrokes to stand out when other bookmakers began to offer similar services was the fact that their on-course representative was a woman. Helen Vernet joined the firm in 1919 and was made a partner nine years later, continuing to work with the company until just before she died in 1956. That was also the year that the company was bought by Mark and Cyril Stein, and uncle and nephew.

As with virtually all bookmakers, Ladbrokes enjoyed some good times and some more lean ones. Yet the work of the Steins during their formative years in charge prepared them well for the government’s decision to legalise betting shops as part of the Betting and Gaming Act of 1960. Stein used profits from the business to establish a chain of betting shops on Britain’s high streets, allowing them to become one of the best-known names. 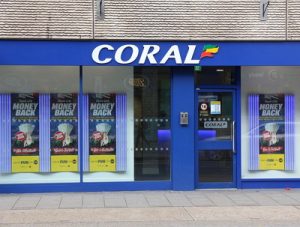 Joe Coral was born as Joseph Kagarlitski in 1904. He founded a bookmakers after his changed name in 1926, primarily focussing on pitches at racecourses. He worked with a friend, Tom Bradbury-Pitt, to run speedway meetings at Harringay, which allowed him to open a credit office in London’s West End in 1943. His association with the sport of greyhound racing saw him open pitches Harringay Stadium and White City Stadium.

Later, Coral added Clapton Stadium and Walthamstow Stadium to his list of venues, opening betting offices after that. When the new legislation passed, he was straight onto what that would mean for the industry, opening his first shop as soon as he was able to. Still, Coral knew that his business was in danger of being lost amidst the traffic of the world of betting, so in 1971 he merged with another bookmaker called Mark Lane.

Though the Tote officially opened before William Hill, it wasn’t a bookmaker in the same way that we’d understand that business to be in the modern era. William Hill, on the other hand, had been running bets since his youth and decided to create his own bookies in 1934. It was semi-legal, accepting postal wagers because cash bets were not allowed at the time, with the semi-legality coming from his decision to also take cash wagers.

When the Betting and Gaming Act passed in 1960, Hill was one of the few bookmakers who didn’t rush to open a shop of his own. Indeed, he saw such venues as a ‘cancer on society’, choosing instead to stick with his own smaller service. Eventually it became clear that he wouldn’t be able to survive without opening a shop of his own, which he did in 1966. Hill himself retired in 1970, dying a year later but not before he’d founded one of the best-known betting shops in the world.

Nowadays, BetVictor is a betting service that is available almost exclusively online. When William Chandler founded his bookmaking service in 1946, however, doing things over the internet wasn’t even something you’d have found in science fiction books. He got into illegal bookmaking in the 1920s, using the money to allow him to build Walthamstow Stadium greyhound track on the grounds of a track that had previous stood there.

That opened in 1933, officially taking bets in 1946, which is why that’s the date that we look at as being when the company was officially founded. The business grew and grew, staying in the Chandler family. In 1999, Victor Chandler, who had already founded a telephone betting business, moved his entire company to Gibraltar in dispute with the tax system at the time, eventually forcing a change of policy from the British government that still has repercussions today.

Companies such as Betsson and Paf were technically founded before Betfred, but they both have complicated histories and were born in the likes of Sweden and Åland. Betfred, however, was created in Salford when Peter Done and his brother Fred decided to open a bookmakers with money that they’d won from betting on England to win the World Cup in 1966. It took another three years before they could open another shop.

In the decades that followed, though, Betfred grew to become one of the biggest and most influential betting companies in the world. They launched a telephone betting service in 2002 and were one of the first bookmakers to have an online presence, launching their website two years after that. Nowadays, the company has more than 1,000 high street shops and employs in excess of 10,000 people.