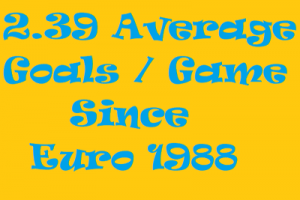 Can it really be true that international matches produce less goals? The gulf in quality between teams is so massive at some points that surely goal fests must be a regular occurrence.

But then, the gap between lesser nations and the those large teams has thinned in recent years as the playing field evens out.

Plus, when we get to the major international tournaments, such as the upcoming European Championship, only the very best sides are generally still in the competition.

It set us thinking, what is the average number of goals per game in the European Championships?

In the run up to mega tourneys like this, or the FIFA World Cup, we know that many bettors look ahead over the known fixtures in order to make bets, particularly in Over/Under and both teams to score betting markets.  It is therefore useful to predict how many goals in total will be scored during the competition, or in individual matches.

But before you go placing bets such as this though, it might be wise to know the average amount of goals scored in the previous renewals of the European Championships.

Average Number Of Goals Scored In A Euros Match

The first ever European Championships was held in 1960 in France when only four games were played in total. That year, the average number of goals per game was 4.25, much higher than the current average.

Since, and including, UEFA Euro 88 in West Germany, there has been an average of 2.39 goals scored per match at the UEFA European Championships.

The table above shows the average number of goals per game for the UEFA European Championships since 1988.  The rate has gone up and down but has generally stayed between 2-2.5 / game.

Of course, it goes without saying that the more teams playing in the competition, the more games there are and the more goals will be scored.

The number of teams that qualify for the tournament proper has increased over the years. In 1988, only eight teams were in the finals whereas today 24 teams will contest the tournament. That has also had a knock on effect on the competition as some of the quality of old has been shaved off.

The table above shows how many goals were scored in total during the UEFA Euros since 1988.

In the European Championships of 2016, 24 teams took part. Those two extra groups helped make a tournament total of 108 goals in its fifty one matches, 30 more than the previous tournament.  The average per game was, however, the lowest since Euro 1996.

Euro 2020 was a goal fest in comparison with 36 more goals, 142 in total, at 2.78 per game over the 24 matches.  This was perhaps aided by the nature of the tournament taking place across the continent with many teams able to play on home soil.

Taking our 2.39 goals per game average since 1988, it could be predicted that 2024 could produce around 122 goals in its duration.  Suggesting international tournament games do not score in as higher numbers as people think or perhaps even bet on.

Nobody wants to see a boring game so there is a propensity with many people to bet on high scoring games, because that is what they want to see.  There will be high scoring games at Euro 2024 but the overall average won’t be that much more than two goals a game.