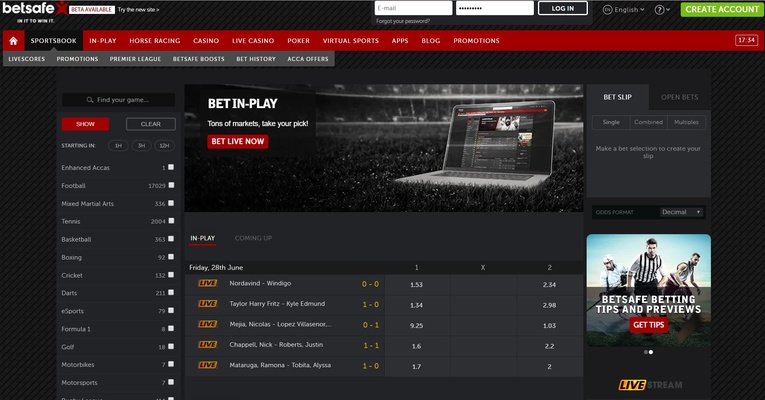 Betsafe is actually a subsidiary member of the Betsson AB group, a Swedish company that controls a number of similar online betting operations.

You may well have heard of Betsafe as they are the official betting partner of Manchester City – just one of their many attempts to increase their foothold in the UK in recent years.

In a crowded market Betsafe do numerous things to stand out from their competitors, aside from offering a top notch sportsbook, of course. They’ve won awards for their customer service and they boast some of the fastest withdrawal times in the industry. That might not sound all that impressive from a betting point of view, but when you have been mishandled at other bookmakers you come to value customer service above all else. 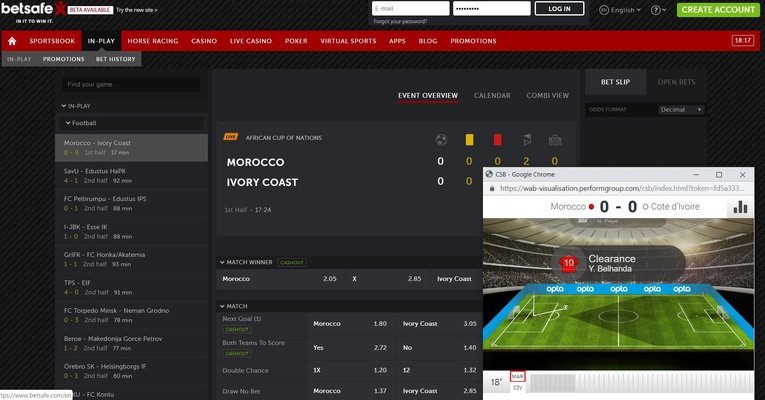 Volleyball, basketball, tennis, rugby union, football and more are all covered live by Betsafe, and the number of lines available on all of them is impressive compared to the industry standard, sport by sport.

Their interface is a little different to the usual, they have had a bit of a reshuffle, but it’s excellent. The live stream or match tracker is available embedded into the interface or as a separate window, and I like that choice to be mine, plus, it comes with an in depth set of stats for the event in question.

There are plenty of cashout opportunities and the interface is available as an overview, a calendar, or a combi view which gives punters plenty to work with and options as to how they want to go about their business.

I also like that by choosing a specific event you aren’t cutting yourself off from the rest of the live betting opportunities; you can still keep an eye on and browse everything else from inside event view.

There are some events streamed through the Betsafe website but they’re sporadic and inconsistent. There doesn’t appear to be any rhyme or reason to it but it will be obvious when it is happening – a small TV icon shows up next to any event that us being live streamed.

Football and tennis are streamed more than other sports, but it isn’t restricted to these completely, and the streams themselves are good quality at least.

You can see on the live event calendar which games will be streamed. 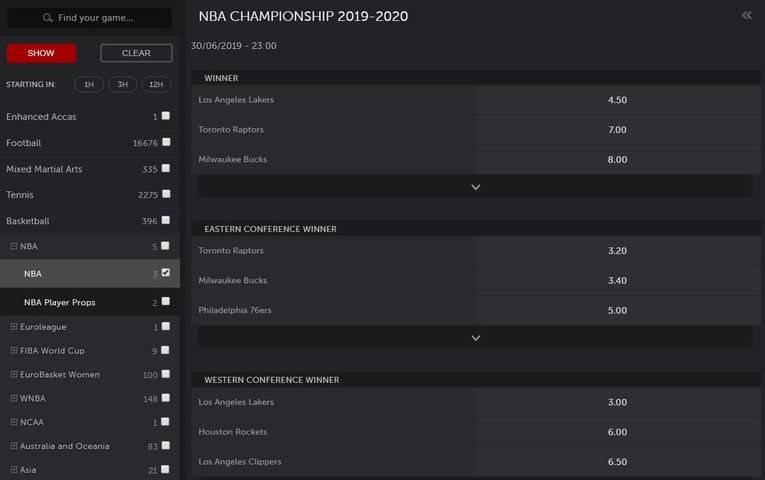 Given that they’re not one of the most well-known bookies on the market I was very impressed with their website when I first used it. It has a really slick user interface that responds quickly to requests and is targeted towards an audience that knows their betting. The colour scheme could be slightly more exciting though – varying shades of grey and the occasional ribbon of maroon aren’t exactly setting the heart aflutter.

The design works well though, especially the sports menu which allows punters to ‘tick’ the categories they are interested in before the unwanted options are removed; perfect if you have a select list of sports or leagues that you regularly bet on and don’t want any other distractions.

The homepage is also tailored well towards live or upcoming events, with many of the most popular being automatically on show and the option to view those starting in the next 1hr, 3hrs, or 12hrs – proper planning prevents pi… you know the rest.#

Overall, it might not be very inspiring but it’s been built to do a job and it does it very well. 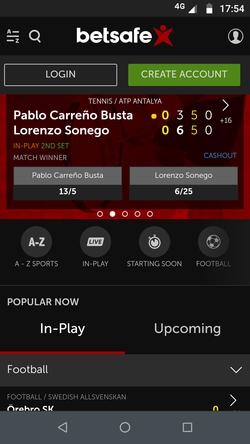 After a period of time apart, the desktop site and the app are now essentially one and the same thing, and they are everything you could want from a mobile betting company.

The red, black and grey colour scheme works much better than it does on the main site, much more sharp and crisp, and the smaller screen means there is less of an expanse of grey.

Unlike a lot of other betting company’s mobile offerings, this isn’t just a miniaturised version of the desktop site, it’s much more interesting than that and has an entirely different layout.

There are various menu’s and scrolling menu bars that all make perfect sense in their location and functions, and live betting is a much more engaging experience on mobile – strangely, it feels more intuitive to work with as well.

A main menu button is your gateway to the A-Z, live section, bet builder, and popular bets amongst much more, and there is also a scrolling menu on the homepage offering quick access to certain markets and, handily for those of you that enjoy it, any live streamed events.

A search bar is also available for a more targeted approach and everything to do with support and the cashier is located under a separate account menu which keeps everything nice and tidy.

There is a better than average depth to the markets on offer from Betsafe. The most betting lines full stop will be found on the football, with more than 16,000 bets available as I write this out of season on a Friday evening.

There are plenty of sorts covered too, including some fun ones that not all other bookies bother with. The likes of handball, mixed martial arts, Aussie Rules and even winter sports are available here.

After being absent completely for years, horse/greyhound racing is now deserving of its own section of the website these days thanks to the link up with Racebets; this also has the added benefit of gifting Betsafe one of the best racing interfaces on the internet.

Betsafe’s odds are reasonably good on the football, excellent for MMA, but you’ll find better odds on most other markets with different bookmakers, although not always by much.

Plus, the Acca offers and Betsafe Boosts do a lot to create extra value and nudge them ahead in some cases.

I’m an advocate of the betting portfolio for this very reason, and Betsafe is definitely a site to consider adding to yours.

Betsafe launched in 2006 and boast nearly half a million customers from more than 100 different countries. They are considered to be one of the top 50 online betting companies for customer service worldwide, which is no mean feat in a business where customer demands are so high.

The UK market always evaded them somewhat until clever sponsorship deals with Man City and the hiring of Connor McGregor as an ambassador, amongst other deals, got them the fifteen minutes of fame they had deserved. It was in 2011 that their progress caught the eye of bigger fish.

Betsafe’s parent company, Betsson AB, swooped in and bought the business in 2011, but they can actually trace their roots back to 1963 when AB Restaurang Rouletter was formed. It was later changed to Cherryföretagen AB and supplied Swedish restaurants with slot machines. They bought into Bettson in 2003 and changed their name to match that in 2006, the same year that Betsafe opened. You see? It all ties together! 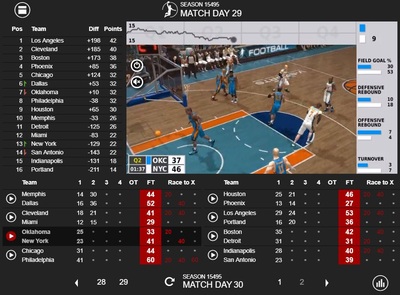 It’s hard to cover everything in a short review like this, but there are one or two things that need to be mentioned to really round off the sort of quality that Betsafe can offer.

Yes, overall they are a very well rounded bookie that doesn’t really drop the ball in any one area, but in some ways that also makes it difficult for them to truly stand out.

So on top of everything we have mentioned so far, here are one or two extra betting features to be enjoyed at Betsafe:

They don’t mess around with pending times at Betsafe so any withdrawal requests will be processed within 24 hours, and maximum limits are only transactional so you can make more than one if you have a big win.

It’s good to see that there are no fees attached to transactions either, and since they are a continental bookie the number of currencies they accept is bigger than most. Maximum deposit limits peak at £45,000 using an eWallet.

Betsafe’s customer support is available 24 hours a day 7 days a week year round, and it never takes long to get an answer however you contact them. They really take some beating in this department.

Social media is more about promotions and engagement rather than support, but they will help if you get in touch.

The website and overall operation is run by BML Group Ltd, a company based in Malta; the parent company, Betsson AB, is based in Sweden. Most importantly of all, though, they have a UK Gambling Commission licence, issued to BML Group with the licence number 39579.

If you need to write to them or send them a present then the principal address is as follows:

When and How Will Betting Shops Reopen After Lockdown?