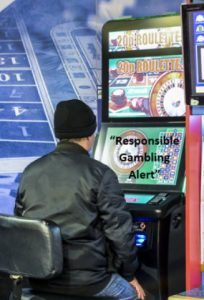 Gambling machines found inside high street bookmakers in the UK are set to be updated with an Artificial Intelligence (AI) indicator that will detect and react to potential addictive player behaviour by alerting staff and shutting down for a predesignated time period.

Known as Anonymous Player Awareness System (APAS), this AI uses algorithms that will monitor a player’s behaviour to the second in order to determine evidence that the user in question is chasing losses, playing too long, acting erratically or taking risks that are unlikely pay off.

Should it find any such cases, the game will automatically freeze and lock its user out for 30 seconds for what has been termed a cooling off period. During this half a minute, the machine will also alert the shop manager while flashing up a series of safer gambling warnings.

This new technology has been introduced by order of the recently formed Betting and Gaming Council (BGC), an industry group that represents 90% of the UK betting and gaming market. This is part of their plan to tackle growing concerns over problem gambling in the UK and the often painful fallout from gambling harms.

These AIs are, at first at least, going to be installed on each and every gaming machine across the United Kingdom’s 8.500 betting shops before being introduced to gambling machines right throughout the entire industry should they prove to be successful.

At the same time, an automatic secondary alert will trigger separately from the other alert once a player has been playing on a machine for 20 minutes. This will be a mandatory warning that will activate a softer 20 second cooling off period with staff once again also being alerted.

”I see this as an opportunity to champion the highest standards and share best practice on safe betting and gaming and we hope these measures are a sign of intent. I’m convinced that this approach can help restore public trust and I look forward to working on further betting and gaming initiatives across the industry.”

“Even if the responsibility were put solely on the punter, a subsequent impact will certainly be felt in the lives of over-stretched, and often poorly paid, staff in bookies. The violence associated with these machines is a worrying trend and I hope this will not lead to a degradation in worker’s experiences who often pay the price for decisions made in boardrooms.”

While this software is designed to prevent problematic by reacting to erratic or excessive play, a study of Norwegian gambling machines by Professor Griffiths and his colleagues indicates that cooling off periods will do little to solve the problem in the long run, likely failing to curb either problematic gambling behaviour or the amount of money staked.

The changes to in-shop machines have hit William Hill particularly hard it would seem. Reporting a a fourth quarter profit, the firm believe that a decline in its retail business in the UK has been offset by an increasing presence in the US market.

In May last year, US states were officially authorised to legalise sports betting for the first time in after the US Supreme Court gave the go ahead. Likened at the time to a digital gold rush, William Hill were one of the first companies in the queue looking to exploit the newly opened market. In the following 18 months, William Hill have collected a 26% share of the US sports betting sector while maintaining a presence in 10 of the 13 states in which sports betting is legal.

In terms of retail, Hills’ net revenue fell 16% which the bookmaker fully admits it was expecting due to the impact of new lower stake limits being applied to Fixed Odds Betting Terminals (FOBT) plus the cooling off changes outlined above.

Hills have also been forced to shut 700 UK shops as part of the William Hill Triennial Review meaning their entire UK retail estate now consists of only 1,600 shops.

However, for the US operation, net revenue was up by 60% and delivering on their strategy to be a market leader in the country. Part of their strategy was to launch a new digital platform ahead of the NFL season plus striking new partnership deals with casinos in their 10 states of operation.

In Nevada, their acquisition of CG Technology’s race and sportsbook assets, which closed this week, has further strengthened their position in the state while also allowing them access The Bahamas.

Back home, online net revenue, something Hills are increasingly focusing on, is on the rise following the acquisition of Mr Green which is now well underway. This transaction, the firm say, is performing as expected. Even this however has been effected by the closure of its Swiss operation plus issues elsewhere with payment processing methods in use across some European markets.

In other European markets, the company is set to roll out a number of new technology developments such as a new sportsbook front end for Italy and Spain where a single wallet solution will also be added before the end of the year.