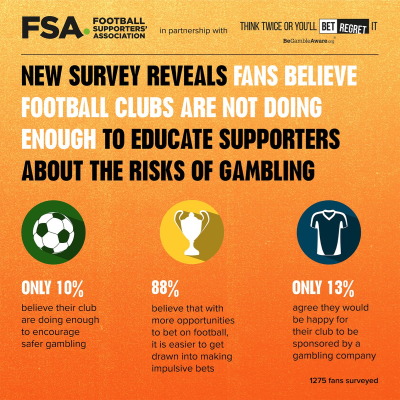 GambleAware have teamed up with the UK’s Football Supporters’ Association to make a plea to English professional football clubs to help fight in the war against gambling harms by educating their fans to be aware of the dangers involved.

According to a new FSA survey carried out in partnership with GambleAware’s Bet Regret campaign, designed to promote safer gambling, in a league where over half of the competing teams have an official betting partner or a shirt sponsor, only 10% of fans believe that their club is doing enough to highlight the risks of gambling.

The survey quizzed supporters about their concerns regarding gambling in football as well as club attitudes. In return, only 13% questioned admitted to being comfortable with their team partnering up with an online betting firm. Others flagged concerns over gambling influence and exposure to kids.

“Football clubs are not like any other business – they are an integral part of many match-going supporters’ lives and have a duty of care. It’s clear fans want their clubs to do more on educating their supporters about the risks of gambling and alongside GambleAware we’ll be pushing clubs, particularly those with prominent gambling sponsors, to do better.”

The survey is only the beginning of a set of initiatives organised by GambleAware and the FSA designed to alert supporters to the potential pitfalls of gambling that will run throughout the 2019-20 football season.

In February, GambleAware launched phase one of their Bet Regret campaign which was deemed a success after commanding a 61% rate of recognition with its target audience. Just a month ago, the charity commenced with the second stage of the campaign.

“The results of the survey highlight fans’ concerns that football clubs and gambling companies could do more to encourage safe betting and make people, especially young people, aware of the risks. Our new partnership with the FSA is based on a shared agenda to help create a safe betting environment in football. It means the voice of the fans will be heard and allows us to engage directly with them in communities to encourage moderate betting behaviour.” 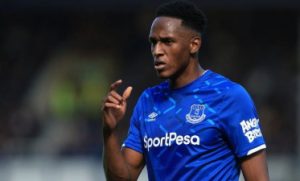 Current Everton footballer, Yerry Mina was fined £10,000 last week for his appearance in a TV gambling operator advertisement back home in his native Colombia. The Football Association (FA) hit the defender with the punishment after he featured in the ad for Colombian operator Betjuego, something that the FA became aware of in May this year.

For his role in the advert, Mina was charged with breaching FA Rule E8 (3) which forbids players under their administration from promoting gambling activity and as such the FA couldn’t let the player off merely with a warning.

Instead, an FA regulatory panel concluded that a fine would be more appropriate. However, they did reduce the original fine to £10,000 based on mitigating circumstances as argued by his club. The player was also warned about his future conduct.

His club, Everton, argued for mitigating circumstances in which the player speaks severely limited English leaving him unable to understand the rules as laid out by the FA in a presentation. The Merseyside team also made it clear that the offending advert was not broadcast outside Colombia and that Mina himself requested that the commercial be pulled from the air.

Finally, the Toffees concluded that Mina did not profit from the advert, and instead donated his appearance fee to the Yerry Mina Foundation, a charity he set up in 2016 in an effort to help disadvantaged children in Colombia.

Mina was not the only sportsman with betting connections to find himself in hot water last week. 19-year-old Leeds United midfielder Jordan Stevens was handed a six-week ban alongside a £1,200 fine for betting on football matches.

Stevens admitted to betting on 59 matches in total between August 2018 and May 2019 and when questioned about the transactions by the FA, the player acknowledged betting £510.12 through Sky Bet.

The player’s bets included five matches that featured Leeds, the team he had signed for in February that same year, as well as 23 bets placed on competitions in which his new club were participating. This breached FA Rule 8 (1) (a) (i) which prohibits players from betting, through themselves or others, on any football match or competition.

The FA also concluded that Stevens knew full well of the FA’s betting regulations but showed a wilful disregard for them all the same and as such the player has been banned from playing until 10 October.

Elsewhere, 31-year-old Brazilian professional tennis player Diego Matos has been banned for life after he was convicted for multiple match-fixing offences. The player was also fined £101,421 plus instructed to repay winnings of $12,000 for match fixing.

Matos was found guilty of manipulating the outcome of 10 matches played during 2018 at International Tennis Federation tournaments in Brazil, Sri Lanka, Ecuador, Portugal and Spain.