Problem gamblers seeking help online were, until early January 2020, being openly targeted by ads from gambling operators when searching on Google for problem gambling helplines.

The world’s largest search engine’s algorithms were returning adverts promoting online betting sites and casinos along with thousands of pounds worth of bonuses and promotions offered by the very sites that the user had been trying to avoid.

For example, Google searches using the term Gamstop – a UK programme for self-exclusion – returns a list of offshore based online casinos, based in overseas locations such as Cyprus and the Caribbean island of Curacao among others, that are not signed up members of the Gamstop programme, as required in Great Britain. However, since Gamstop doesn’t apply to offshore jurisdictions, players were being encouraged to indulge in their problematic gambling habit further.

These adverts would display offers of hundreds of free spins and other common marketing incentives in order to attract players towards online slots, roulette and other potentially addictive games. This, then, enticed problem gamblers when they are clearly at their most vulnerable and had already self-recognised their problem, into wagering more money.

Some of the complicit affiliate sites even boasted of being able to bypass the software designed to protect problem gamblers from further harm.

At the start of the new year, the top four returns when performing a Google search of Gamstop UK had been casino affiliates allowing customers to work around the self-exclusion service, with the top slot leading with the slogan “Not on Gamstop Popular sites. Get 300 per cent Bonus!”. Affiliates and other third-party sites have been using such slogans, including “find the best sites not on Gamstop here”, as well as providing users with the means of evading the software employed to safeguard problem gamblers from wagering again.

Google, who claim to rely on a combination of humans and algorithms to filter adverts and enforce their rules, reacted quickly to the issue, initially pulling the offending ads from view. The US giant also stated that they always seek to promote responsible gambling practices, including in advertisements.

This, they claim, is evidenced by their actions in the US where the company has been working with individual state governments to tackle offshore affiliates trying to promote gambling products, while they have always been strict about allowing real money gambling apps on their Android Google Play Store.

Since being highlighted, most of the offending accounts had been suspended from the Google AdWords platform but a search performed as recently as Jan 07 2020 did still return some casino affiliates, with one return even showing up as high as fifth place on the first page and once again bragging about getting past Gamstop.

Carolyn Harris, the chair of a cross-party group to stem gambling harms, labelled the search results as immoral and admitted that she doubted the industry’s true commitment towards self-exclusion, and whether there was enough willingness in gambling companies to address the problem head-on.

Stopping short of blaming the Internet giant Google of being at fault, Labour MP, Harris, said;

“I don’t necessarily blame Google. In a way they are victims of the ingenuity of companies who are capable of bypassing any measures that are put in place. I have serious reservations about the entire self-exclusion system and the gambling industry’s willingness to tackle the problem.”

Not A New Problem 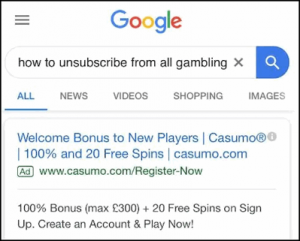 There have been other similar cases of gambling laws being broken recently too. In October 2019, the Advertising Standards Authority (ASA) banned an advert for a casino app that bombarded customers who googled “How to unsubscribe from all gambling” with even more gambling ads, while at the start of the same year, the BBC exposed flaws in Gamstop which allowed excluded individuals to get back in to UKGC-licensed casinos through simple name manipulation.

Fiona Palmer of Gamstop admitted that, in regard to the latest scandal, she remained “very concerned” that people searching for information on self-exclusion are only seeing sets of results promoting gambling and not Gamstop or other organisations that provide support for problem gamblers.

Palmer said that Gamstop, who are now the first returning result on an appropriate Google search, are working with Google and other search engines to ensure that people searching for self-exclusion information will be directed to Gamstop while ensuring that, going forward, gambling websites will not be included within the search results.