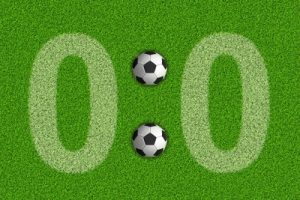 Football matches ending in a tie are an inevitability and, as an outcome, create another worthy betting opportunity. They are, after all, an extremely likely outcome, even if betting on the draw remains unpopular relative to the amount of times it happens.

Many people rarely place a bet on a match ending in a draw because it isn’t very often the desired outcome.  We often bet on matches we want to watch and few people want to see a draw, so there is a propensity to avoid the market.

For small teams in a David versus Goliath type match, a draw can be as welcome as a win, but for the most part teams, and supporters and by extension bettors, will opt for a win, with 2-1 one of the most popular bets made with bookies.

Despite not often being what you wanted to see, from a betting angle, draws can be attractive.  Betting odds are affected by the amount of money wagered on a market, not many people bet on the draw and that can in some instances mean the draw market offers the most value to the punter.

But how often do draws occur after 90 minutes in international mega tournaments such as the upcoming Euro 2024?

Of those 51 matches, only 12 returned a draw result after 90 minutes. There were 13 draws out of 52 matches at Euro 2016. That is around a quarter of the games played.

Drawn Matches After 90 Minutes (Since Euro 96)

Going back further, in the history of the tournament as a whole, on only one occasion has a UEFA European Championship final ended in a tie after extra time.

That was back in 1974 when Czechoslovakia drew 2-2 with West Germany with, amazingly, the Germans being beaten on penalties.

Most Common Score For Draws Since Euro 96

Out of the 61 draws that there have been in the Euros from Euro 96 onwards, 32 were recorded as 1-1. That’s almost half the time a match in the Euros is drawn, the score has been 1-1.

On 121occasions, matches ended with the score 0-0, while there are five times each that the final score at the end of 90 minutes the result was 2-2 and 3-3 telling us that low or scoring draws are far more likely.