According to the latest set of United Kingdom Gambling Commission (UKGC) figures, gross gambling yield for the online gaming sector in the United Kingdom actually went up this year in spite of it being a particularly hard year for the industry.

Despite the gambling market experiencing something of a decline, particularly among the retail sector, the gross take for the UK climbed by 2.9% in the 12 months leading up to September 2018, while market share also jumped by 1.2% up to 39% over the same period.

The UKGC releases two reports annually and this latest report showed that the rise in the online sector’s take went from £5.5 billion to £5.6 billion, representing a significant increase in the face of an overall 0.4% year-on-year fall to £14.5 billion. The report also details that football and horse racing were, unsurprisingly, the major contributors to the sum, while the National Lottery also increased its take to £1.5 billion, marking a growth of 0.3% over same period.

“Despite the marginal decline across the wider gambling industry, the online gambling sector continues to grow; our role as regulator will continue to see us working to raise standards right across the industry.

Following our comprehensive review of the online gambling sector in 2018, this year we have implemented new rules to strengthen age and ID verification checks and we’ve also been working with partners in financial institutions to develop the role they can play to protect vulnerable consumers.

Last month we published the new national strategy to reduce gambling harms which has a renewed focus on plans to widen research, take a preventative approach to gambling harms, assess treatment provision, embed a culture of evaluation, and encourage industry to collaborate to make gambling safer.’’ 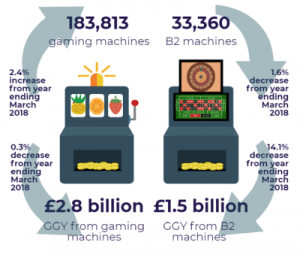 Overall employment in the industry went down however, not least after William Hill became the first bookmaker to announce a forthcoming cull to their high street betting outlets, committing to shutting down 900 stores across the UK by the end of the year. Betting shop numbers have now depleted to 8423, thanks mainly to new stake restrictions that have been enforced on the popular but controversial Fixed Odds Betting Terminals (FOBTs).

For the same reasoning, Ladbrokes have also identified approximately 1,000 betting shops which could also find themselves on the endangered list come 2019/20.

It was also announced last month that work has begun on a new £12-million Casino 36 in Birmingham which would bring in more than 70 jobs and is expected to open in the summer of 2020. This, despite Casino 36 being recently charged £300,000 for money laundering failures and poor customer protection by the UKGC.

The Year In Numbers 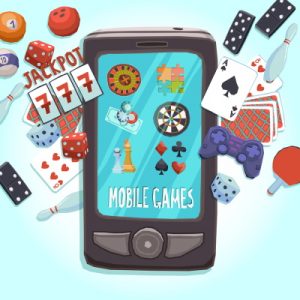 Despite high street betting shops taking a major hit, over the counter betting did still prove to be the largest contributor to the land based yield, bringing in £3.20 billion. Even this though was down from previous reporting period by £0.10 billion. Casino yield also dropped, despite the new venue, going from £1.18 billion to £1.08 billion. At the same time, bingo’s take slipped from £682.8 million to £677.8 million and arcades from £427.5 million to £421.6 million.

In contrast, online gaming enjoyed another bumper year, with remote gaming is now responsible for 38.8% of the UK market, up 1.2% on the previous period.