NOTE: Golden Goal is currently unavailable, if it comes back in the future we will update this page.

Ultimately it is the job of betting companies to win and maintain the business of customers. Given that they’re all operating from roughly the same starting position of sporting events to cover and bets to offer, they have to try and be clever to get one over on their rivals and give customers something unique to do with their time. There are loads of different things that the various bookies do, such as Coral’s Football Jackpot.

Here I’m going to tell you about the idea that BetVictor came up with to differentiate themselves from the crowd, Golden Goal. This is a fantastic prediction game that requires no deposits or betting and your first go is completely free.

What Is Golden Goal?

The idea of BetVictor’s Golden Goal competition is actually really simple, though I can’t say that it’s easy to win. Then again, why should it be? Part of the nature of competitions is that they’re tough to crack and that’s what gets you returning to try again and again. 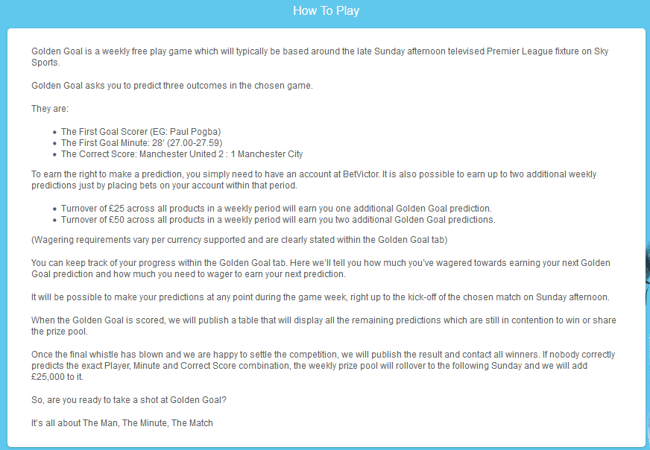 All you need to do to win is correctly predict the time of the first goal, the goalscorer and the correct score of a selected televised match each week. Do that and you could find yourself £25,000 better off (or more if there is a rollover).  If multiple people guess the same the prize is shared..

The chosen match is normally a Premier League game and it is commonly one that is being played late afternoon on a Sunday. BetVictor do change this every now and again, though you don’t need to worry too much as they tell you at least one week in advance.

How To Play Golden Goal 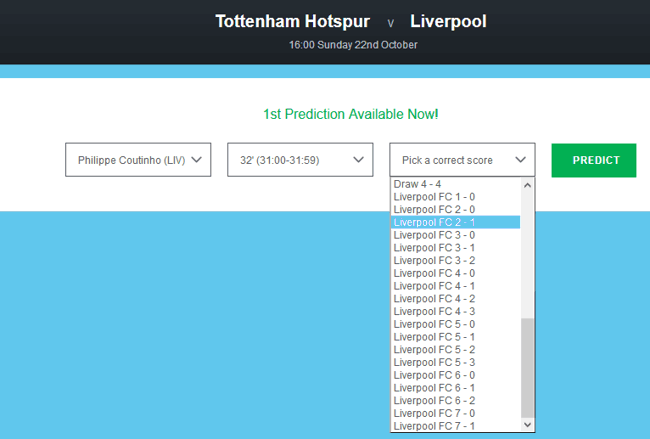 Whether you want to play via the BetVictor website or their mobile app, the way you play the game is the same. You’ll firstly need to head to the ‘Golden Goal’ section on your chosen device. Once you’re there you’ll be presented with a dropdown menu of possible goalscorers from each team. This will include the goalkeepers and even an ‘Own Goal’ option. 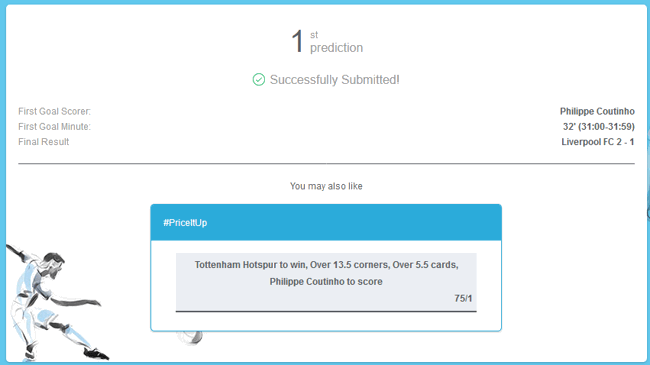 Once you’ve selected the player you think will score you’ll then see another dropdown menu that lists all of the possible times they could score separated into minute intervals. Do you think they’ll score within minute 0-1? 7-8? 63-64? Make your selection there.  Finally pick the correct score and and submit .

If you get both the goalscorer, the time of the first goal and correct score correct then you’ll be a winner. The weekly prize is £25,000 and if there’s more than one winner then you’ll share the prize out equally. 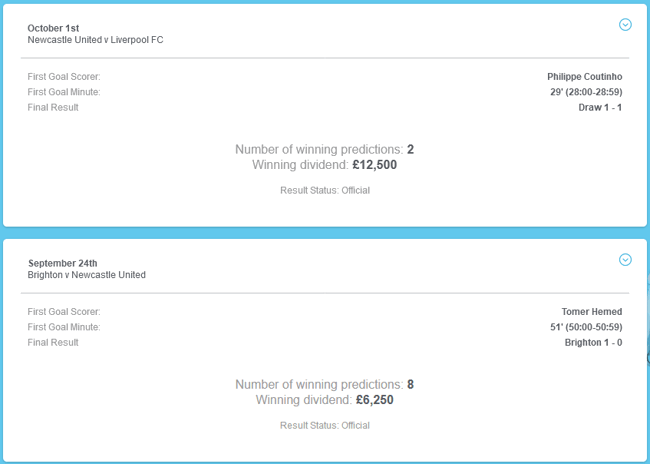 Interestingly, if there are no correct predictions then the prize will rollover to the next gameweek. As you can’t predict ‘No Goalscorer’ this will happen if the game ends 0-0. Therefore if your prediction was an early goal and it’s still 0-0 at the 90th minute mark, you better keep your fingers crossed that no one smashes in a late winner!

The Golden Goal competition is open to anyone with a BetVictor account, therefore over 18 years old in the UK.

Every week you’ll get one free prediction that you will be able to access when you’re logged in. Make sure your contact details are up to date, too, as they’ll e-mail you confirmation of your prediction and also want to get in touch with you if you win!

One of the nice things about this particular offer is that it is open to everyone, but loyal customers also get rewarded for their loyalty. If you bet £25 through BetVictor then you’ll be able to have a second prediction. That £25 can be spent on the sportsbook or in their casino, which is nice.

Should you bet £50 or more then you’ll get a third prediction, too. The maximum number of predictions you can have is three, so feel free to place £75 worth of bets but don’t be expecting a fourth prediction if you do so.

Is It Worth It? 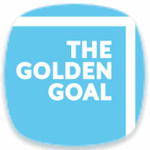 Let’s be honest, anything that’s free but that can win you money through is worth having a crack at. All you need to do to take part is be a BetVictor customer and they’re one of my favourite bookmakers to use, so I don’t really see a downside.

I wouldn’t necessarily say that you should go out of your way to bet an additional £50 in order to get two more predictions, especially considering the sheer number of possible goalscorers, times and score possibilities. However if you tend to place that amount of money on bets anyway then it would be silly not to make use of your additional guesses.  BetVictor are an excellent football bookmaker.

What I would say is that if you’re hoping to snag all £25,000 for yourself then you might need to think outside the box. Going for the most obvious goalscorer might increase your chance of winning but everyone else will be thinking along the same lines.

For example, when Brigton hosted Newcastle United in the 2017-2018 season Tomer Hemed scored the first goal in the 41st minute and the game ended 1-0. 8 people predicted that, though, so they were awarded with £6,250 each. Still a very big amount but not the fortune that they might have been hoping for when they saw the goal go in!

That’s why it’s always worth betting on a more unlikely source such as a central defender or defensive midfielder. Your chance of winning may decrease slightly but the chance of taking home a bigger prize will increase.  When Swansea hosted Newcastle in the same season a defender, Jamaal Lascelles, scored late on, 76th minute, and Newcastle grabbed an unexpected 1-0 away win.  There was only one winner this time and as it was a rollover the previous week they grabbed a massive £50,000 in cash.

It’s also worth nothing that if you opt for the 44th minute or the 89th minute then you’ll likely be getting yourself some added time. Those bets both include any stoppage time that is included in the game. That means that if the goal is actually scored in the 93rd minute of the game but you selected 89-90 then you’ll win.

NOTICE: This promotion is no longer available.  For active offers visit BetVictor below: