We are no longer able to recommend Super 6, for a list of existing customer loyalty schemes and free games see our betting offers section.

When it comes to football, especially the Premier League, Sky Sports are the champions of live coverage. Many competitors have come and gone, from Setanta to ESPN, with only BTSport managing to threaten their dominance in recent times. If you want to know what’s going in the world of sport then on goes Sky Sports News. They’ve got apps, television stations and they’ve even got an associated betting company.

It’s the latter that I’m interested in right now. Sky Bet’s tie-in with Sky Sports Soccer Saturday is Super 6, a game where you predict the results and scores of six different games for the chance to win £250,000 (or more, up to £1,000,000 sometimes). Here I’ll tell you a little bit more about how it works and what you need to do to win. I think it’s an exciting, fun game that is well worth playing as it’s free. Read on to see if you agree!

How To Play Super 6

First things first, you need to register as a Sky Bet customer. What you might be pleased to know is that this is open to all customers, regardless of whether or not you’ve ever actually placed a bet. As long as you’re registered with Sky Bet you can have a crack at Super 6 and see how you get on. You don’t even need to have money in your Sky Bet account.

Once you’re logged in you’ll be presented with six matches selected by Sky Sports that you need to predict the scores of. Typically these games are taken from the Premier League, Championship or Scottish leagues, but even international matches have been used in the past so don’t be surprised by what they throw at you.

Like with any pre-ante bet, you need to get your predictions in before the first game kicks off. Normally they choose matches that take place at or after 3pm on the Saturday, so as long as you’ve made your predictions before then you should be fine.

So you’ve logged in, made sure it’s before the start of the first match and you’ve found the list of matches. What next? Well this is where you’ll earn your money, so to speak. What you need to do is have a look at the matches and decide what you think the scoreline is going to be in each of them. It doesn’t matter whether you think it will be 1-1 or 11-0, simply enter your selections and then submit them.

Find Out More About Super 6

How To Win the Super 6 Jackpot

The obvious answer to the question ‘How do I win?’ is that you correctly predict all six scorelines. Do that and you’ll be walking away with £250,000, or a share of it if more than one person gets their predictions spot on.

It becomes a little bit more complicated than that when talking about the secondary prize that comes into play if no-one wins the main jackpot. That is £5000 and it is awarded to the person that has the highest score from that week’s round.

“The highest score?” I hear you say. “What’s that?” I’m glad I pretended to be you and asked. You see, points are given out for several things based around the prediction game. If you correctly predict the outcome of the match, as in which team wins or if you called it a draw, then you get awarded two points – even if your score prediction was well wide of the mark. 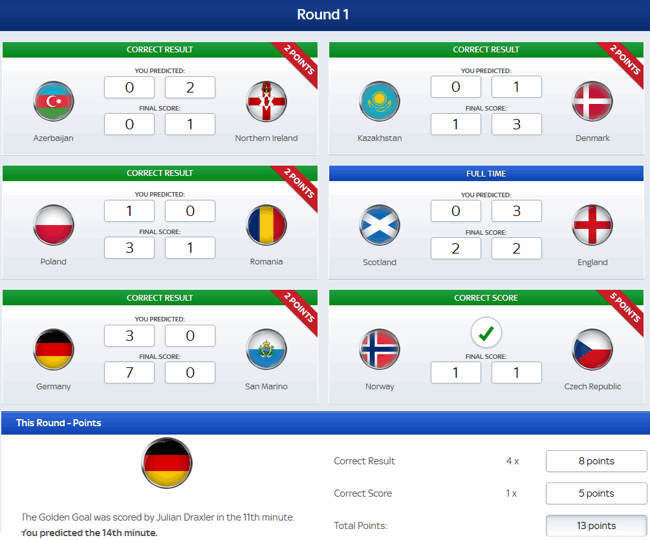 So if, for example, you predict Liverpool to beat Everton 1-0 and they actually beat them 9-0 then you’ll get two points for predicting the correct outcome in the game.

Obviously this is a game that rewards those of us who are good at predicting things. So if you get the right scoreline of five games, get the scoreline of the sixth game wrong but guess how the match turns out then you’ll finish the week with 27 points. If that’s the highest amount of points of all competitors then you’ll win £5000.

As well as predicting the scoreline of six matches, participants of Soccer Saturday’s Super 6 are also asked to guess the time of the first goal of those matches. This is known as the ‘Golden Goal’.

If, say, two people both correctly predict all six scorelines then they will share the £250,000 prize, taking him £125,000 each. The Golden Goal isn’t relevant for the main prize, it’s shared out between however many winners there are.

If no one wins the £250,000, however, and there are several people on the same number of points then that is when the Golden Goal comes into play. The person that got closest to the correct time in Golden Goal will win the £5000 as it is used as a tie-breaker.

On a side note, if the person who wins the £5000 has correctly guessed five scorelines then they’ll also get an additional £1000 to say well done.

Help With Your Predictions

Sky Sports has a number of well-known faces attached to it as a brand. From Jamie Carragher and Gary Neville through to Graeme Souness and Thierry Henry, there are a few former footballers who work for the network.

That’s why if you’re struggling to decide on what scoreline to predict for any given game you might want to click on the ‘Pundit’ tab of the Super 6 game. There you’ll find the predictions of some people who should know what they’re talking about such as Jamie Redknapp and Matt Le Tissier. My only advice would be to read what Paul Merson says closely. And then do the opposite…