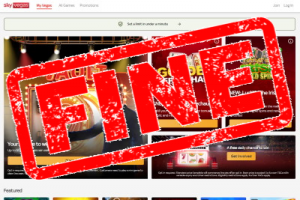 Bonne Terre Limited, which is the name of the company behind Sky Betting and Gaming, has been issued with a £1.7 million fine by the United Kingdom Gambling Commission. The fine comes on the back of the company sending promotional emails to customers who had self-excluded and chosen to opt out of getting marketing information. The offer that was sent out to the customers on the self-exclusion list was for a Sky Vegas promotion, promising them 100 free spins if they were to bet £5, causing issues with the UKGC.

The email was not only sent to 41,395 customers that had chosen to self-exclude, but also to an additional 249,159 punters who had decided to unsubscribe from marketing emails by the operator. In sending out such an email to so many people who had asked not to get those sorts of marketing messages, Bonne Terre Limited had breached the conditions of their Licence with the Gambling Commission. As a result, the UKGC felt as though it had no choice but to issue the fine. It came on the back of fines issued to 888 and BetVictor, which totalled £11.4 million.

Self-exclusion is a tool that has been put in place to help those that feel as though they may be gambling too much. In order to impose some sort of control over their betting, punters can ask operators to refuse their custom. All operators have to offer such a service as part of their licence with the UKGC, which Sky Betting and Gaming duly did. In addition to being unable to place bets, those that choose to self-exclude should also not be sent any offers or promotional material, which is where things went wrong for Sky Vegas here.

Punters that had self-excluded from Sky Betting and Gaming’s services were sent an email offering them access to a promotion that the company was running through its Sky Vegas brand. The offer promised them 100 free spins if they were to bet £5 on games that were offered by the company. This was essentially an inducement to place bets, which obviously went against the licensing agreement put in place by the UKGC with Bonne Terre Limited, the parent company of Sky Betting and Gaming. This alone would have been enough to catch the eye of the Gambling Commission.

In addition to sending the email to those that had chosen to self-exclude, though, the same email was also sent to customers that had chosen to opt-out of receiving marketing emails. Whilst this was obviously a less harmful mistake than sending it to those that had made a decision to self-exclude, it still broke the terms and conditions of the gambling licence issued by the UKGC. With 41,395 customers that had self-excluded receiving the email and 249,159 punters that had opted out of getting marketing info also being sent it, the Sky Vegas email reached 290,554 people that it never should have been sent to.

The Gambling Commission takes its role as protectors of the vulnerable seriously. As a result, it chose to issue Bonne Terre Limited, the company that trades as Sky Betting & Gaming, a fine of £1.17 million. It was felt that the actions breached the licence conditions that are aimed at ensuring socially responsible gambling in the UK. Speaking on the matter, the Chief Executive of the Gambling Commission, Andrew Rhodes, spoke about how all operators needed to learn from the mistakes of Sky Betting & Gaming in the future.

“Self-excluded customers are likely to be suffering gambling harm and should absolutely not be sent direct marketing that could tempt them back into gambling.

We would advise all operators to learn from Sky Betting and Gaming’s costly errors and ensure their systems are robust enough to always prevent the self-excluded, and those who have clearly rejected marketing, from receiving promotional material.”

The fine was lower than it might have been, he said, had the people that had chosen to self-exclude actually been allowed to login and actually place bets, or if Sky had failed to co-operate.

As it happens, Sky Betting and Gaming did at least work to ensure that decisive action was taken in order to stop a repeat of the mistake in the future. On top of that, the self-excluded customers were unable to take advantage of the offer, so they could not place bets with Sky Vegas on the back of receiving the email.

Regardless, the breach of the licensing conditions happened and it was felt by the Gambling Commission that a fine of £1.17 million for the email sent on the 2nd of November 2021 would be punishment enough.

Is The Fine Big Enough?

“Licensees must, as soon as practicable, take all reasonable steps to prevent any marketing material being sent to a self-excluded customer.”

Sky Betting and Gaming failed in that, as well as in part 5.1.11 of the code, which refers to needing consent in order to contact customers via ‘electronic marketing’. In both instances, customers were contacted when they should have been, which led to the UKGC issuing its fine of 1.17 million. The question is, is such a fine large enough to act as a genuine deterrent to companies in the future?

Whilst Sky Betting and Gaming would undoubtedly have preferred not to have to pay it, sending such an email to nearly 300,000 people will have yielded at least some profit for them. In an industry that is worth billions, does just over a million really count as anything more than just a rap of the knuckles? How many other companies will, as Rhodes asked them to, ‘ensure their systems are robust enough’ to stop such a thing from happening again, given that they know now that they’ll barely have a fine worthy of the name to pay if they fail?

One of the big arguments in the world of betting at the moment is that the Gambling Commission is essentially toothless to stop the big betting companies from riding roughshod over their rules and regulations. This fine, issued for a truly poor lapse of judgement, will hardly be enough to counter the arguments against the UKGC. If punters can self-exclude or opt of marketing and still be sent emails for about £1 million in fines, that might be seen by some as a price worth paying. Or are Sky Betting and Gaming just a poorly run company that made a mistake?