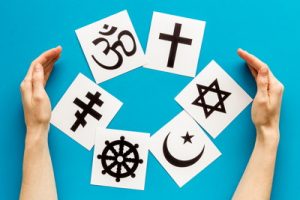 Here in the west, gambling is a very popular pastime and dates back for centuries.

Like many vices, if you consider it such, gambling goes back to the beginning of time, and is even mentioned in the Bible.

Considering that the three Abrahamic religions, Christianity, Judaism and Islam are all born of the same original texts, it is surprising that there are so many different interpretations.

When it comes to leniency in what you can and cannot do, Christianity, in the main stream at least, seems to have less restrictions than the others.

In the stricter Islamic countries, alcohol, gambling, and even pork, which is technically forbidden in Judaism too, are all forbidden but these are all freely attainable for Christians.

Another thing that Islam forbids is gambling.

While each religion takes its own stance on gambling, most frown upon it especially when it might be problematic.

So, how do the five major religions in the world view gambling in focus?

There are more than 2.2 billion Christians worldwide, making it the biggest religion on the planet.

Christians follow the teachings of the bible in which we are told of stories where Roman soldiers would cast lots which was a dice rolling game of chance to determine an outcome.

One of the more famous mentions of the casting of lots happens in the book of Exodus where Joshua rolled dice to decide where 12 tribes would be settled.

Some gospel writers have even claimed that Roman soldiers cast lots to determine which of them get what of Jesus’ clothes at the crucifixion.

It is also said that when Jesus required a 12th disciple following the betrayal of Judas, he, St Matthias, was chosen as the replacement by the casting of lots.

Jesus himself said little specifically about gambling but did preach about the evils of chasing money urging folks to choose god instead.

However, with his clear disdain for wealth it is unlikely he would approve of gambling, but the fact that we are told even his most devoted followers gambled, suggests why Christian countries might tend to take a more tolerant line against gambling.

Unlike other religions, Christianity doesn’t provide official guidance on where gambling stands, but nevertheless stricter parts of the religion, such as hardcore Methodists in the US, are vehemently against it.

With Christianity being born of Judaism, it is unsurprising that they share many traits.

One of these is a near silence on gambling.

Guidance on gambling does not feature heavily in Judaic scripts but all the same, playing for money was likened to theft and was frowned upon by authorities with rabbis teaching at the time that professional gamblers were not considered to generate anything of worth and showed a lack of commitment to doing real work and as such were not seen to be reliable legal witnesses in courts of law.

And yet the Israelites believed that casting lots was an expression of God’s will.

Which is probably why the casting of lots features in the story of Jonah and the Whale.

It is also worth noting that part of the Hanukkah celebrations include spinning the dreidel, game where family members wager small amounts of money on a nominated outcome.

And furthermore, celebrations including light gambling are encouraged in some synagogues during Purim, which is a Jewish celebration that commemorates Esther’s saving of the Persian Jews.

The late UK Rabbi Louis Jacobs said that playing cards, betting on horses and taking part in games of pure chance are accepted in Judaism as long as people are careful and responsible

In the Islamic faith gambling is considered to be haram or forbidden.

That said, in certain situations that the Islamic holy book, the Quran, will allow lighter forms of gambling.

This is usually when the gambler is guaranteed a win which supports the faith’s teachings not to be wasteful of money and to appreciate the efforts that go into gaining wealth.

The Muslim Prophet Muhammad said in the Sunan Abu Dawud that “Wagers are allowed only for racing camels or horses or shooting arrows.”

This is why gambling is largely considered to be immoral in Islam but there are occasional exceptions which were added in order to encourage early Muslims to be prepared to defend themselves.

Gambling is outlawed in the majority of Muslim countries and can be punishable by imprisonment or caning in the stricter nations.

Gambling is largely illegal in the likes of the UAE and Saudi Arabia and even Qatar, hosts of the 2022 FIFA World Cup.

However, some of the countries in the Arabian Gulf will relax those rules for non Muslims and tourists.

Hinduism is another that takes a dim view on gambling.

This is in spite of the fact that there is a dice game that forms one part of a major Hindu text.

In the Hindu text the Mahabharata, which is likely to have been written in the 8th and 9th centuries BCE, there is a dice game that forms an important part of the second book, the Sabha Parva or the book of the Assembly Hall as it is sometimes known.

In the Sabha Parva, the king Yudhishthira is tricked into playing a dice game the outcome of which costs him his kingdom before he and his family are banished for 12 years.

The story is designed to serve as a lesson about dealing with treacherous people and the dangers of wagering.

Even so, the Hindu faith looks down on gambling for entertainment purposes and is outright forbidden in some harsher Hindu practices.

Like Christianity, Buddhism takes a fairly relaxed approach when it comes to gambling.

This is hardly surprising given the faith’s more tolerant reputation.

It has addressed the issue, however, separating gambling into three separate categories, recreational, habitual and addictive.

The last of those, addiction, is not condoned under Buddhist rules, however, gambling for fun or as a habit is tolerated under the condition that the people who do undertake gambling do so responsibly in order to avoid running into future addictive gambling problems.

Also, interestingly, monies raised from raffle draws and lotteries can be used to collect funds for Buddhist organisations.